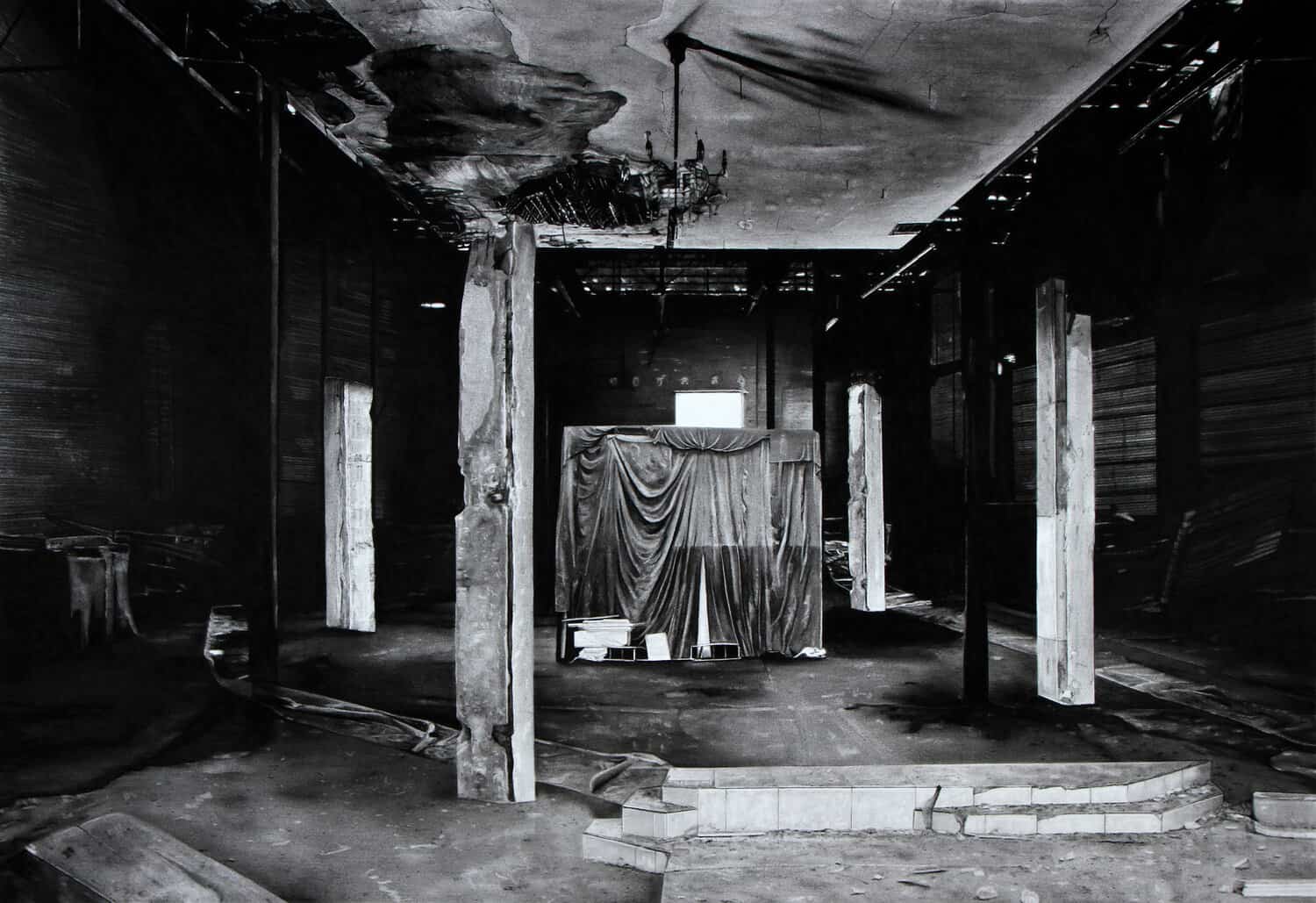 Who prepared us to live with this worry?
At what point did we cease to be at peace?
And what to do, now that we are here, trembling and trembling, that is to say engaged so often in spite of ourselves in the general vacillation of things? (1)

Louvoiement, telescoping, hitting, smashing. Convulsion of the spaces of thought, vulnerability of incarnate body-souls. Impermanence is de-binding, the first act of anxiety and fear doomed to remain. Chamboulment, or invites him to move in the work of Nicolas Aiello (1977, France), Mathieu Dufois (1984, France), Hipkiss (1964, England) and Massinissa Selmani (1980, Algeria). Shaking up, or invites him to let himself drink the vertigo revealed by the shaking, the breaking, the grasping.

Stay, stay, live, as much as be inhabited by trouble. (2) Admit movement and transformation, not want to find anything, bend shamelessly under the yoke of disorder.

Thus MASSINISSA SELMANI reverses the continuum of existence and breaks the linearity of time. He drank photographic fragments from the media. The Algerian artist isolates and unravels from the original context in order to create a gap, a gap in which the imagination flourishes. But be attentive to this in-between, in its heart are rushed disaster. It is a real power of condensation of reality that is discussed in massinissa Selmani’s work: between derision and gravity, oscillation allows the emergence of sedimentation. The series Amorces dans l’air léger takes up this methodology specific to the artist: different elements are taken from press images in order to be assembled within an ambiguous set design where deaf the storm, the protest. In this same movement of auscultation of images of the written press, mostly of conflicts, the drawings of the series Heavy hulls reveal figures adopting a posture of withdrawal and entrenchment. Beyond latent violence, an unexpected lascivity emanates. Throughout his work, the artist tends to use absurdity and irony to distance violence. The contours disappear, the derision takes hold of the drawings and the work feeds on the intimate, the poetic and the political.

Where does our memory drown?
Standing in my present
The past the future are my seasonal flowers (3)

MATHIEU DUFOIS leads us to the dawn of images – these ghosts crossing time and places to better intertwine our experience of the present. Drawing on the black cinema of the 40s and 50s, the French artist takes us to the land of the first time. He examines, reappropriates, possesses the memories and images that flow from it. After a meticulous deciphering of film sequences or archival photographs, Mathieu Dufois brings together nude lyrics, contorts the flesh of time, silence multiplies vertigo: a new substance emerges. The fright dispels the scenery, we are without a way out in the swell of torment. The narrative and emotional precision of Mathieu Dufois’s work is an impressive mastery of black stone.

HIPKISS embraces the mystery, operates a lifetime. The Capitules shape a world woven both in the fiber of the plant while being imbued with a mechanical abundance. Sparks in the maze of their thought, the British duo’s drawings branch an abyss where the underground depths join the earth’s voices.

Only traces make you dream (4), René Char said of poetry. The traces of NICOLAS AIELLO, by rhythms and swirls, dig a wake, stir, lead us to the shores of awakening. The weaver time seems to have invited itself into the Artist’s Archipelago. In the incessant rebirth, we are invited to stay in the line of drawing. Skin wrinkles, organic spelling, unknown macrocosm, slow trajectory guided by the sovereign desire to invade the void? It is a world without enclosures that we witness, free to each one to be the host of its filaments.

Let’s accompany the flowers of the upheaval that grow in our veins. Let us accept the vertigo of a time that leaves us orphaned, but which ushers in the dawn between our fingers. This is what this exhibition invites us to do, to get carried away by the reflections that artists deliver.