Tierradentro, in French "the land of the interior", derives from an archaeological site located north of the Andes in Cauca in Colombia. Protected for its monumental sculptures and buried tombs, it houses the remains of a vast pre-Hispanic culture known only in fragments.

From this place, Daniel Otero Torres updates pre-Columbian knowledge and legends from various regions of Latin America; imagines correspondences with archaic cultures of the Mediterranean basin; is inspired by Hindu and Egyptian deities; weaves parallels with contemporary events and experiences that are personal to him. Borrowing the gaze of the anthropologist, the naturalist, the physicist, or the reader of science fiction, he develops a hybrid and impure cosmogony made of friction and reconciliations.

Its practice is thus that of fragmentation, collusion and detail. Each drawing is the result of a process of collecting archival or media images and photographs made during trips, which he combines in heterogeneous compositions. These combinations are then deployed, enlarged or miniaturized; relieved of any context element; then transposed through drawing on paper, stainless steel and ceramic.

Through various narrative paths — the fighters forgotten during the conflicts of the XX th century, the psychotropic powers of Brugmansiasplants, the transformations of the man-jaguar, the genetic variations at the origin of the evolution of species, or the dogs without a master with multiple names — the exhibition explores the themes of the journey between the worlds, the links between sacred and profane, between vernacular cultures and planetary thought, between intimate memories and collective memory.

"Tierradentro" generates a new system of relations between time and beings. It is a space where another history of crossings and syncretism occurs; where the challenge is to think about what connects us to others from the point of view of myth, political struggles, as well as emotional and daily life. Place, ship, feeling and planet, for Daniel Otero Torres, "Tierradentro" is all this at once.

Anaïs Lepage
Curator of the exhibition 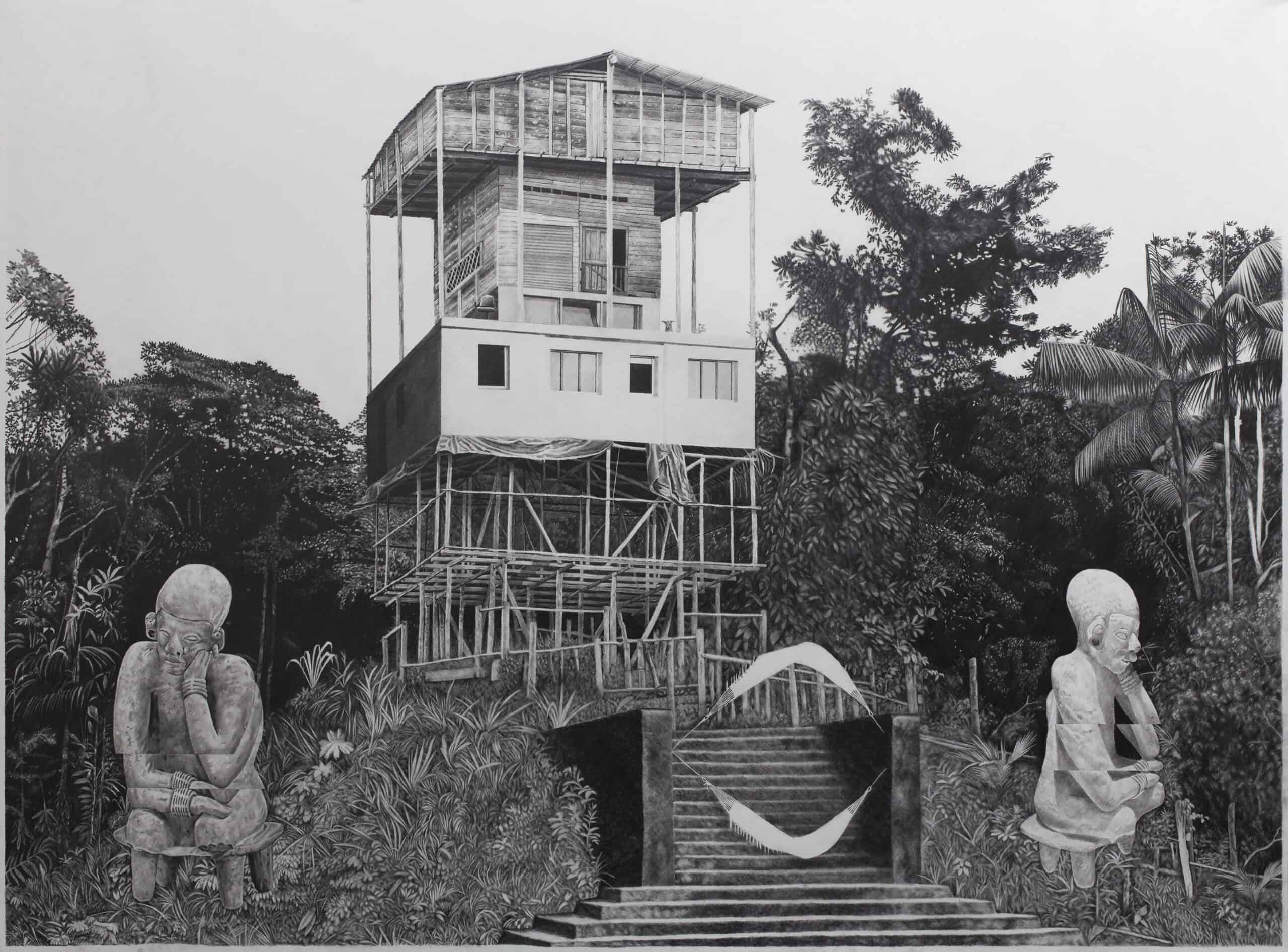 SATURDAY 13 MARCH 2021 | FROM 11 a.m
EN THE ARTIST AND CURATOR
Practical Information
Contact us

A QUESTION? ASK OUR CULTURAL MEDIATOR.
FREE CHAT SERVICE FROM MONDAY TO SATURDAY FROM 11AM TO 7PM

Born in 1985 in Bogota (Colombia) and graduated from the National School of Fine Arts in Lyon - Prix de Paris 2010, Daniel Otero Torres lives and works in Paris.

Daniel Otero Torres was a resident of L'Attrape-couleurs in Lyon and the Cité des Arts de Paris (2011-2012), the Moly-Sabata residence in Sablons, France (2014) and Villa Belleville (2015-2016). He received the prize from the General Council of the National School of Fine Arts in Lyon; the Rhône-Alpes Prize for Young Creation, Rendez-vous 15, Lyon Biennale; and the award for the creation and research program Outside the Walls of the French Institute.

His works have been exhibited in many French and international institutions such as the Bullukian Foundation, Lyon (2010); Heidelberg Kunstverein, Germany (2011); Kunstverein Sparkasse, Leipzig, Germany (2014); The Centre for Contemporary Art in Villeurbanne (2016); the MRAC Sérignan Regional Museum of Contemporary Art — where he presents a solo exhibition (De)placements (2017) and a group exhibition Bands apart (2018); The Sheet, Clermont Ferrand (2019); FLAX Foundation, Los Angeles (2019); Espacio 23 from the Jorge Perez collection, Miami (2019) and MACAAL, Marrakech (2020).

Anaïs Lepage is an exhibition curator, art historian and curator.

Her research focuses on the excesses and minority facts of art history in connection with a cultural history of affects and spirituality, decolonial, gender and feminist studies. She reflects on the forms of writing on art by moving critical, narrative and intimate registers during collaborations, workshops and performances.

Trained in Art History at the École du Louvre, in Museology at the University of Quebec in Montreal and in Curatorial Studies at the University of Paris I Panthéon Sorbonne, she multiplies her experiences in France and abroad. She started at the Maison Rouge in Paris, at the Museum of Contemporary Art in Montreal and alongside Guillaume Désanges at the Verrière - Fondation Hermès in Brussels. She then became an assistant curator at the Museum of Modern Art in Paris, the Museum of Contemporary Art in Chengdu and the Louis Vuitton Foundation in Paris.

She co-founded the curatorial platform HEIWATA, based between Paris, Mexico City and Toronto, and participates in the queer and feminist writing workshop How to Suppress Universty Writing led by Émilie Noteris. She has developed projects with artists such as Madison Bycroft, Julien Creuzet, Gaelle Choisne, Tarik Kiswanson, Ad Minoliti and Rachel Rose. She has recently collaborated with AICA International, CNEAI, the Palais de Tokyo and the International City of Arts in Paris. Since 2019, she has been teaching the exhibition curatorship at the University of Paris 1 Panthéon-Sorbonne.