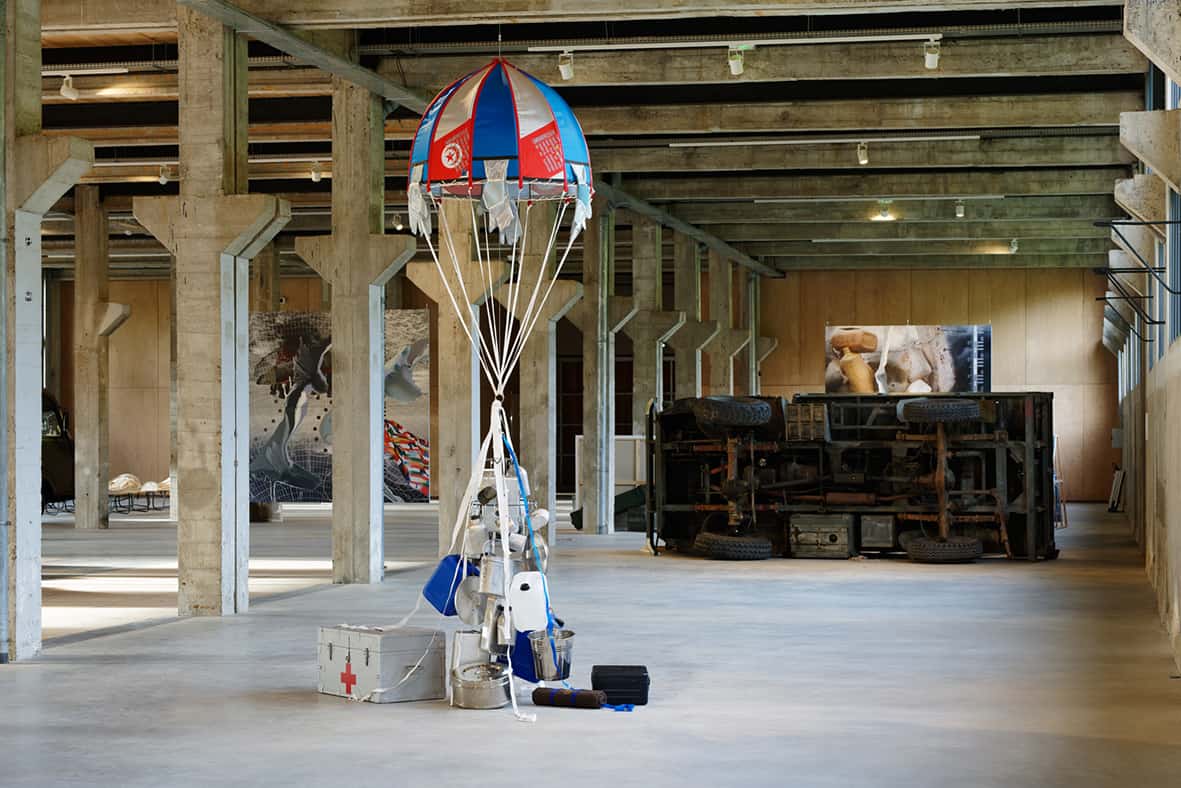 For their exhibition at the Tanneries entitled Lucy – Jorge Orta: Interrelations, the two artists extend through the presentation of unpublished gestures series of works emblematic of their practices and their common research developed since their meeting in 1991. They explore and thus highlight the interrelationships that internalize them. By renewing the singular alphabets that underlie them – between pictorial practices and installations, redevelopments and combinations – the exhibition takes on the appearance of a milestone- between retrospective and prospective dimensions, roots and ramifications – always in the interest of (re)signification of a state of the world attentive to social, economic and ecological issues as well as environmental and humanitarian emergencies.

Transforming for the occasion the space of the Grande Halle into a huge setting that resembles a wasteland or a deserted makeshift camp in which time seems to have stopped, Lucy – Jorge Orta (Lucy, born in 1966 in Sutton Coldfield, United Kingdom and Jorge, born in 1953 in Rosario, Argentina, live and work between London, Paris and The Mills) it consists of three large matrix ensembles made in situ where realities and fictions meet, presences and absences, actions and contemplations. Constellation of sculptural works, this silent décor combines aesthetics and ingenuity, order and disorder, in a singular and fragile beauty that meets – and accounts for – the dread. Through it are expressed both feelings of urgency and hopes, destruction and reconstruction, observations and reflections, realism and optimism.

The first set, Fragments of History or Interrelations,is organized around a Saviem military truck and its trailer, two new variations from the Mobile Intervention Unit Convoyseries. Around them are about fifty paintings, the smallest of which give the impression of having literally fallen from the truck when the largest are suspended between the concrete pillars. Although their formats have a new character in the artistic practice of the duo, the medium as such is part of a more distant lineage that goes back to the forms ofaction-paintings – such as “immersion” and “the derrame – directed by Jorge Orta in Argentina in the 1970s, dictatorial years in which his paintings became increasingly radicalized in order to express the growing injustices of society. The scenes composed and represented in their photographic realism constitute fragments of universal stories that artists witness. You can see endless queues, women and men bundled up, but also parched and dusty fields, breaking waves, swirling winds of Antarctica or a hut built on stilts in the middle of the ocean, sharing its fragility with those of corals and schools of overfished fish. Covers (“immersions”) and drippings (“derrame”) partly mask these figurative elements of their abstract essence and are therefore the sensitive and fragmentary metaphors of a wobbly world – overwhelmed and overflowing, caught in a chaotic flight forward. These composite heaps are as much attempts at the poetic nomenclature of the world as personal measurement tools – between figurations and abstractions – developed by the two artists in order to restore a form of state (s) of the world and the challenges it faces, from the depletion of resources to the increasing weakening of ecosystems as well as the human condition.

Lifeline or Makeshift Camp, the second set presented here, also reactivates and prolongs the reflections developed by the duo of artists around the increased fragility of human populations by associating a military ambulance with wide open doors with a large deployment of revisited camp beds. Merged with monotonous linen bivouacs, these new Life Guards are thought of as real individual refuges, also echoing the Refuge Wears designed by Lucy Orta in the 1990s. The combination of the elements – between recoveries and metamorphoses – is thus a protective combination through which the artist experiences possibilities: protect, assist, etc. While questioning the fragility and precariousness of the body and human nature, Lucy Orta also highlights its resilience and the outpouring of solidarity.

Constituting the natural and symbolic link between man and his environment, the research on water – from its collection to its distribution through its treatment and packaging – led by Lucy – Jorge Orta within the meta-series OrtaWaters represented and continued here through the presentation of a Drop Parachute and an unusual boat that looks like a micro-craft treatment plant. Zille Purification Unit – built from a a river “machine-architecture” installed above the soaking tanks of the skins of the original tanneries, directly fed by the river. In keeping with the history of the place, the work recalls the essential aspect of water in industrial activities, as well as underlines its major role in the processes of population displacement- these boats can be seen as the very symbols of the exodus. Portable and functional water recycling plants, sculptures Water purification plant created by Lucy and Jorge Orta also highlight the major challenges and challenges associated with the scarcity of drinking water while sketching out the potential premises of a concrete solution whose production scales align with that of their workshop.

Starring Lucy and Jorge Orta: Interrelations, the duo of artists thus offers a true synthesis of its research and experiments – past and current – through which the collective and collaborative dynamics of their work are highlighted, whether from a societal point of view or at the level of creation in the workshop. It is as if the media coverage of global issues, be they climatic, migratory or geopolitical, requires, for both artists, the development and exploration of a “total art”, applied and contextual, modular and operational, constantly on the move and able to accompany the evolutions of our societies while questioning the potential but also the limits of their ingenuity and adaptability, between concrete solutions and